Ctrl+Alt+Del, sometimes seen written out as Control+Alt+Delete, is a keyboard command that’s usually used to interrupt a function. However, what it accomplishes is unique based on the context in which it’s used.

The Ctrl+Alt+Del keyboard combination is usually talked about within the context of the Windows operating system even though others do use the shortcut for different things.

It’s executed by holding down the Ctrl and Alt keys together and then pressing the Del key.

This keyboard command is also sometimes written with minuses instead of pluses, as in Ctrl-Alt-Del or Control-Alt-Delete. It’s also referred to as the “three-finger salute.”

How Ctrl+Alt+Del Can Be Used

In Windows 3.x and 9x, if Ctrl+Alt+Del is quickly pressed twice in a row, the system will immediately start a reboot without safely shutting down any open programs or processes. The page cache is flushed and any volumes are safely unmounted, but there isn’t an opportunity to cleanly shut down running programs or save any work.

Avoid using Ctrl+Alt+Del as a way to restart your computer so that you don’t risk corrupting your open personal files or other important files in Windows. See How Do I Restart My Computer? if you’re not sure how to do it the right way.

In some versions of Windows (XP, Vista, and 7), Ctrl+Alt+Del can be used to log in to a user account; it’s called secure attention protection/sequence. My Digital Life has instructions for enabling that feature since it’s disabled by default (unless the computer is part of a domain).

If you’re logged on to Windows 11, 10, 8, 7, or Vista, Ctrl+Alt+Del starts Windows Security, which lets you lock the computer, switch to a different user, log off, start Task Manager, or shut down/reboot the computer. In Windows XP and prior, the keyboard shortcut just starts Task Manager. 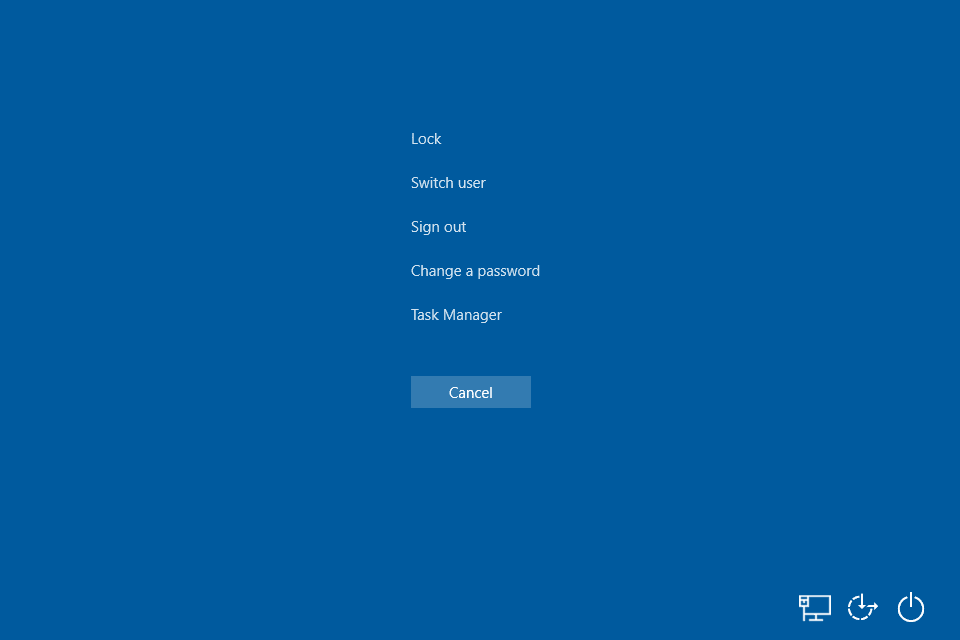 Some Linux-based operating systems let you use the Ctrl+Alt+Del shortcut for logging out. Ubuntu and Debian are two examples. You can also use it to reboot an Ubuntu Server without having to log in first.

Some remote desktop applications let you send the Ctrl+Alt+Del shortcut to the other computer through an option in the menu or via an alternative shortcut (like Ctrl+Alt+Insert) because you can’t usually enter the keyboard combination and expect it to pass through to the application. Windows will assume you want to use it on your computer instead. The same is true for other applications like that, like VMware Workstation and other virtual desktop software.

The options seen in Windows Security when the Ctrl+Alt+Del combination is pressed can be modified. For example, you can hide the Task Manager or lock option if for some reason you don’t want that to be shown. Making these changes is done through the Registry Editor; see how at the Windows Club. It can also be done through Group Policy Editor as seen at Bleeping Computer.

In most scenarios, you can get away with pressing the Alt key first, as in Alt+Ctrl+Del, and it will have the same effect. However, in some situations, there might be software that uses this other shortcut, in which case something else might happen instead of the traditional Ctrl+Alt+Del response.

David Bradley designed this keyboard shortcut. See this Mental Floss piece for details on why it was programmed in the first place.

macOS doesn’t use the Ctrl+Alt+Del keyboard shortcut but instead utilizes Command+Option+Esc to invoke the Force Quit Menu. In fact, when Control+Option+Delete is used on a Mac (the Option key is like the Alt key on Windows), the message “This is not DOS.” will appear as a sort of Easter egg, or hidden joke embedded in the software. Here’s more info about Ctrl+Alt+Del on Macs.

When Control+Alt+Delete is used in Xfce, it immediately locks the screen and starts the screensaver.

Control+Alt+Delete is also used to mean “to end” or “do away with.” It’s sometimes used to explain escaping an issue, removing someone from the equation, or forgetting about them. “Ctrl+Alt+Del” (“CAD”) is also a webcomic by Tim Buckley.